Hi, Friends of Bella Nest! I'd like to introduce you to this old screen door I bought at my favorite antique store.  She was old and super stinky when I found her buried in the middle of other old and stinky doors. Thinking I just might be able to do something with her, I paid $10 and walked out the door. 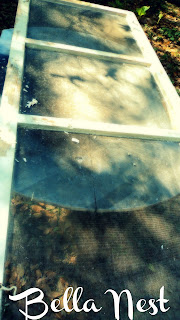 ...thus began the long process to transform her...

First I tried to clean the screen by scrubbing with bleach, but because it's so old, it wouldn't come clean.
So I had to rip it all out. 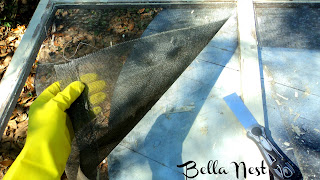 You're thinking this might be an easy job considering that the screen should be rotted and easy to tear and you are right, but the screen fragments were left all the way around each panel. It was very hard to pull them out, even with pliers. I worked on it one day. My husband worked on it another. We both worked on it another day. We each had a pair of pliers and we'd tug on the sides of the door messing the other one up. "I almost had that!" He'd yell. We'd throw in the towel for the day after it was getting too dark to see. This went on for a several weeks!

Finally every piece of the screen was out and now I had to decide if I wanted to keep it chippy or not. I wanted to get the smell out, so I scrubbed it down with bleach and as the old paint started to fall off, there it was...disgusting mold. I used paint remover to try get all the paint off. {Ok, so the brand I used was aweful. I won't tell you the name of it, but it was a spray and it just didn't work.) So I brought our Mr. DeWalt and sanded and sanded and sanded some more.

Now we are around day 120 of this project (no, seriously!) and now that I was pretty sure all the mold was gone, it was time to prime with Kilz. After a few coats of that, I painted a couple coats of a blue I made by mixing different colors. I love the color, but once I brought it in I realized,
it's the same color as my living room walls!
That's a big woops on my part, but it will look great once we are moved and the walls are neutral.

Here she is today: 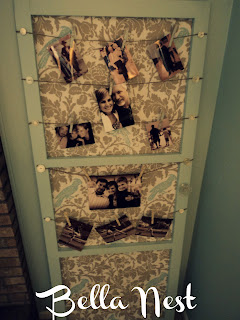 I started to cover the openings with chicken wire, but decided to go with fabric instead. With all the chicken wire projects I have under my belt, it's time for something different! I gave her functionality by using twine to hold my sepia colored pictures. The twine is held on with tacks that I covered with a variety of vintage, pearl white buttons. 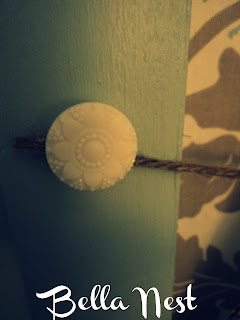 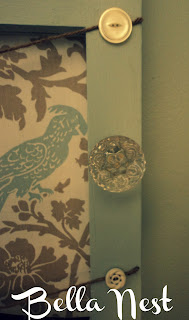 This faux glass knob was a perfect touch. 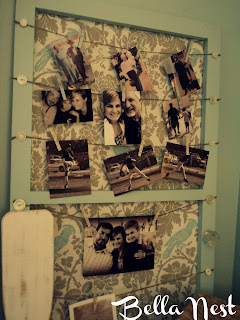 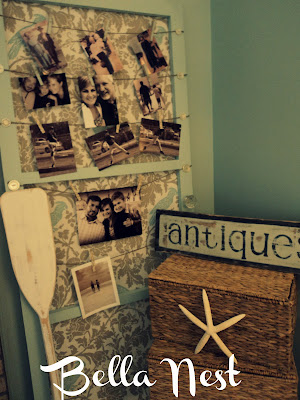 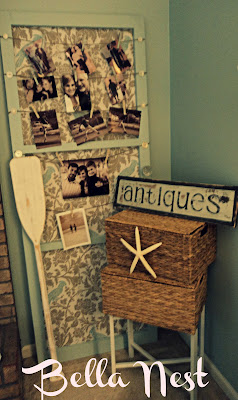 I hope you enjoyed reading about my old screen door adventure.
Although it took me a long time to finish her, it was worth it. I think. ;) 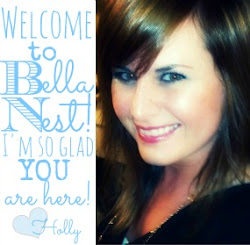 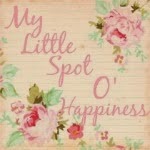 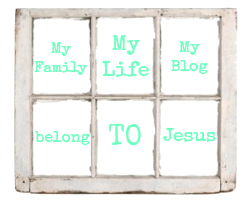